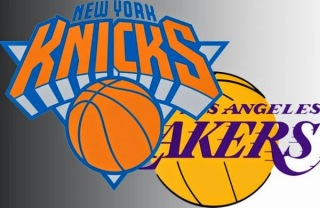 I was talking with a friend today and was reminded of the time I attended the Knicks/Lakers game with him in 2009.  During a business trip to New York City, I had the opportunity to host him and some of his clients at the Feb 2nd game at Madison Square Garden.  With IBM’s presence in the City, it was no surprise that we’d have season tickets, but what was surprising is that they were available.

I requested 4 tickets and was approved almost immediately!  The plan was to invite my Business Partner and friend, Israel Vicente, President of Global Consulting Solutions, and a couple of his clients.  We’d grab dinner, then head to the game for a great night of entertaining – in an effort to secure more business for both of us.

As it turned out, we couldn’t get any clients to commit to the game.  It seems that everyone works so hard and spends so much time away from their families anymore.  So now, inviting them out for yet another night away from home – even if it includes a wonderful meal and great seats to a ball game – is getting more and more difficult.

With time running out before dinner and tip-off, I invited my manager, Laurie, and another colleague, Jan, to join us.  They happened to be in town with me for the same meeting.  Of course, having multiple IBMers was not the best option, but better than having the seats go unused.  Don’t get me wrong, my manager at the time was one of the very best in IBM and I enjoyed spending time with her – but like me, I knew, she too would be disappointed that we didn’t have clients committed.

Oh well…  Laurie’s a sports fan and cheerfully agreed to go, but only because she would get to spend some quality time with Israel.  And the same goes for Jan, who, by the way, played plenty of college ball herself.

After a great dinner at one of NYC’s finer steakhouses, we made our way over to the iconic Madison Square Garden.  I never realized this, but one of the unique things about this venue is that you actually walk up to get to the floor.  Maybe that’s because it sits atop Penn Station – one of the busiest train stations in North America.  In typical New York bravado fashion, MSG considers itself “the world’s most famous arena”.

When we visited in 2009, it was clear that this place needed work – pretty much like every other building in NYC.  It’s now the second-oldest arena in the NBA, behind only Oracle Arena in Oakland, and the oldest arena for the NHL – and it shows.  It was very dark inside with narrow corridors that would get gridlocked worse than the traffic at rush hour. 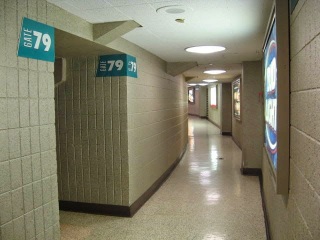 The concession stands were few and far between, so lines were long resulting in even more congested hallways.  This is one of the more spacious areas. 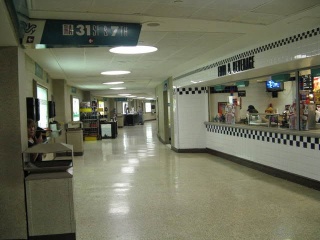 Our seats were lower level, behind the basket, and about 12 rows back.  From here, you could actually tell that the players were not normal-sized human beings.  One of the other benefits of being down low in venues in major cities is that you usually get to see some celebrities.  Sure, Spike Lee was courtside constantly yapping at Kobe, but they were showing others like Bill Murray on the big screens throughout the night.  I was able to find this photo of Jay-Z and “Ugly Betty” star, America Ferrera as they sat courtside that night. 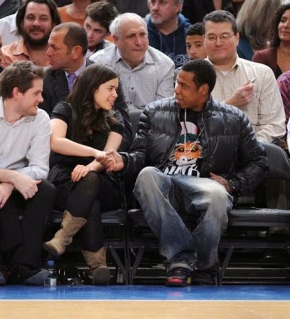 As the game settled in, it was apparent from early on that this was Kobe’s night.  He took control and carried the team on his back.  The Lakers were up double digits heading towards the half when I noticed John McEnroe and rocker wife, Patty Smyth, formerly of Scandal, sitting not too far from us.  You’ll know Patty from the song, Goodbye To You.  I made a gentle bet with Jan that I would get McEnroe’s autograph.  Of course, the crew challenged me.  Game on!

I made my way over the aisle where I suspected they’d head out at halftime.  Sure enough, they came walking out as if on queue.  I politely asked Mr. McEnroe for his autograph, but was denied with a response of “Can we do this later”?  Sure, no problem, I replied.  Slammed.  But, hey, Patty was still there, so I asked her, reiterating how much I enjoyed her music and wouldn’t you know it, she obliged.  John must have been feeling like a piece crap now!  Score!

Back from halftime, Kobe continued to dominate as the Knicks made it competitive, but they were still down double digits and holding.  The Knicks would never hold the lead.  The lead grew larger by the end of the 3rd.

Later in the half, I got up to visit the restroom.  As I entered the narrow corridor near the concessions, guess who happened to walk by?  None other than Mr. Congeniality, John McEnroe.  I quickly blurted out, “Is it later enough now”?  He begrudgingly signed, probably thinking I was stalker and it was the only way to get rid of me.  The results are a unique collectible below.  The ticket stubs are still attached with Johnny Mac on top and Patty below. 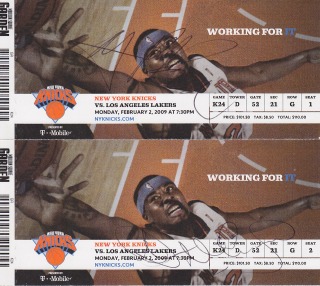 One of the other perks of being down low is that you’re in range for the frequent giveaways of coupons or T-shirts.  This was the first and only time I was ever able to snag a shirt during a game.  I don’t know what size it was or even what it said, but I passed it over to Israel – sort of a catch and release, but I can now claim that I caught a shirt!

You could tell there was something special happening when the “boos” for Kobe turned to cheers late in the game.  Either the Knicks fans had all headed for the trains down below, or that Kobe was close to putting together something of historic proportions.

As the game came to a close, chants of “MVP” rained down.  He finished the night with a Garden record 61 points and turned the hostile crowd into fans.  He set a record that would stand until earlier this year, when on January 24, 2014, Carmelo Anthony poured in 62 for the hometown Knicks against the Bobcats.

The Lakers would eventually go on to win the Pacific, the West and ultimately become the NBA Champions of 2009.  Can Carmelo and the Knicks do the same in 2014?  Not likely…