Normally, these events happen by chance.  It starts with a single event and then turns into something bigger as I’m made aware of other events in the area.  In the past, it’s been a very manual process.  My how technology has changed!

I’ve been able to pull together all of the MLB, NCAA Football and NFL Schedules for the 2014 season and plotted them on a series of interactive maps thanks to a simple web-based app called BatchGeo.  I’ve organized the maps around the NFL season, since the schedule was just released – and I usually travel to at least one Bills game and one Penn State game per year.

The first thing I usually do when the NFL schedule is released is look at the Bills road games to see if I can pull off a Penn State and Bills weekend.  To date, the schedules have never been close without requiring travel to State College, which isn’t the most convenient location.  Unfortunately, this year is no different.  Manually checking two schedules wasn’t too difficult, but after that, it made planning a sports weekend nearly impossible.

As they say, “Necessity is the Mother of Invention”!  Now, I can simply look at each week and drill down where I see a concentration of games to see if I can make an epic weekend out of any of them.

Here’s how it works.  Click on one of the US Maps below that corresponds to the week you’d like to explore.  It will take you to the interactive map.  From there, you can drill down on each location to see the actual matchups, times and locations.  Just click away!  You can drag and click the map to zoom in and out to map out your weekend!

Let’s take Week 1 for example.  As a Bills fan, I know they’re playing in Chicago.  With the map zoomed out, I can see there are 20 events happening in the general area.  The colors indicate the different leagues as noted by the key in the lower left.  With multiple colors, I can tell that there are games in the three different sports I’ve mapped.  This indicates a great start!  Baseball, College and Pro all happening in that general vicinity, between Thursday and Monday. 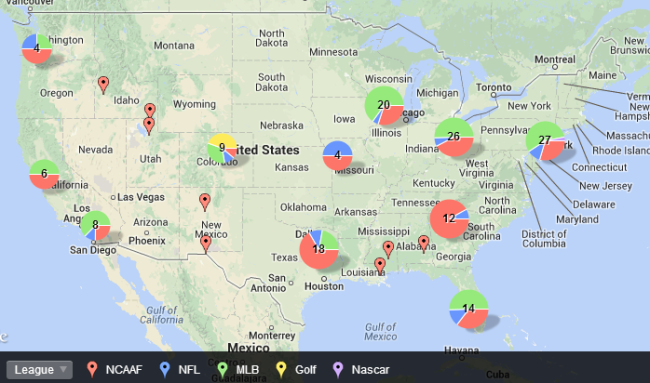 As I zoom into the area, I can start to see the events that are taking place and their locations.  In the map below, I can see that there’s a game in Madison (Wisconsin) and South Bend (Notre Dame).  In addition, the red 5 indicates the Brewers are in town.  If I’m a cheese-head, this might make for a great Badger/Brewer weekend.

Over Chicago, you can see the multi-colored circle.   This tells me there’s a combination of 6 games from three different sports.  To me, that makes for a relatively easy sports weekend!

Drilling in closer, I can see the locations of the pins and quickly tell that Northwestern is home, the Cubs are in town along with the White Sox and of course, the Bears vs Bills.  By clicking on a pin, you can see the details of the event.  If there are multiple games (for baseball), you can scroll through each one to see the details.  For those Chicagoland fans that left the cold weather, this might be the weekend to make a sports pilgrimage.

That’s all there is to it!  Sounds fun doesn’t it?  Now, click on the week you’d like to explore, map out your itinerary and send it to me so I can share with others!

Do you like the Eagles?  Grab their schedule and start clicking on the city in which they’re playing to see if the Phillies are in town.

Travelling for business?  Click on your location to see what game might be happening in the area.

Are you just inspired to be a Wandering Spectator?  Look for high concentrations of colors and numbers and plan an event regardless of teams.

Let’s see who comes up with the best Wandering Spectator Weekend!

Note that I only included games from Thur-Mon since even the Wandering Spectator needs to take off Tuesdays and Wednesdays to recover!

I hope you enjoy!

Special thanks to BatchGeo for their incredibly easy-to-use mapping software!