Watching the Farmers Open today reminded me of the time I went to the US Open at Torrey in 2008 with my buddy James.  This was my 2nd US Open, with the first being in 1998 at the Olympic Club outside of San Francisco.

We scored practice rounds tickets for Wednesday and the opening round on Thursday, so we thought we’d make the quick trip across the desert for an overnighter and a couple of rounds.

It’s an easy and cheap flight, so we decided to fly over and back as opposed to taking the 5 hour car trip.  With limited time there, it made sense.

When we got there on Wednesday, we headed straight for the practice round.  If you’ve never been to practice rounds, you need to check them out.  They’re usually small crowds and the golfers are somewhat accessible.  Instead of seeing one shot at a time, you might get to see the pro take a few shots from the same location as he attempts to dial in his irons or get the perfect read on a putt.

Before things get crazy, you also have time to check out the merchandise tents and other events happening.  I even grabbed this shot with the “replica” Open trophy.

Our most memorable moment on Wednesday was when Ian Poulter was waiting to hit in on the Par 5 18th.  With the group in front of him on the back tier taking multiple putts, Poulter was growing anxious.  He started to hit some shots to the lower tier of the green.  You know the saying from the commercials – “These guys are good”.

While he was messing around, he starting playing with the crowd a bit.  Then, one young gal shouted out that she wanted to take a picture with him.  Without hesitation, Ian invited the girl to cross under the ropes and join him in the middle of the fairway on the 18th.  After a couple of quick shots, she was on her way after a loud applause from the new Poulter admirers in the gallery, including me and James.  Nice touch Ian.  I’d love to see a picture floating around the web of that.

As I mentioned, players are more relaxed and accessible during the practice rounds.  They’re usually pretty open to signing autographs mid-round.  I just happened to by the ropes when Stuart Appleby came through and I offered up my newly purchased souvenir for signature.  Sure enough, he obliged.  Just don’t ask me how you get Stuart Appleby out of that…

After hanging around the day, we headed back to the hotel to check in, grab happy hour and develop a plan for the night.  We checked out the Padres schedule and sure enough, they were in town against the Dodgers! We headed down to Petco Park, scalped a couple of tickets and watched this in-state division rivalry game.

At the game, I was even able to connect with my old manager from my VERSYSS days, Mike.  It was great to see him and catch up after many years.

We stayed around until the end to hear Hells Bells play as Padres closer, Trevor Hoffman took the field.

On Thursday, parking in La Jolla is nearly impossible, so the USGA had everyone parking out at Qualcomm Stadium and running shuttle buses in to Torrey.  This was a pretty unique set up.

Before you board the buses, you have to go through metal detectors.  I thought it would be like typical airport screening settings, so I dropped my wallet and phone in the small bin and walked through.  Nope.  The buzzer went off, so I had to remove extra items.  Belt and money clip go in another bin.  As I’m ready to walk through, they say to take off my watch.  Put that in another bin.

Once through, no bells or alarms, I grab my things and make my way to the bus to meet up with James who breezed through security.  All boarded and ready to leave, I realize that I’m missing something.  MY WATCH!  I yell to the bus driver, bolt toward the door as I tell James, “my watch”.

I ran over to the screening areas where there are several stations set up.  I can’t remember which one I went through.  I think I’m at the right one and make my way, like a salmon swimming upstream, to get to my target.

Once there, I tell the security gal that I left my watch behind and asked if anyone has seen it.  Nope.  Sorry.  “Were you in this line?” she asked.  I have no idea, but I think so.  “Well, I’m sorry, but no one turned in a watch.”.

At this point, I’m freaking out.  The watch I had worn for the past 20 years is gone.  There are thousands of spectators streaming through the lines, laughing, having a good time and then there’s me.  Frantically searching.  I asked for a Security Manager and after what seems like an eternity, a guy comes over and I relay my dilemma and describe the watch.

He searched around, hit a couple of lines and comes back, watch in hand!  Whew.  We’re in for a great day!

It took the entire bus ride for my heart to finally stop racing.  Once at Torrey, we cruised around a couple of holes to make sure we hit the scenic ones including the incredible Par 3 3rd.

At one point, we were hanging by the ropes when the power pairing of Phil Mickelson, Tiger Woods and Adam Scott came through. 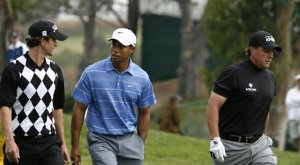 Tiger was playing in his first tournament since the Masters, where he was runner up to Trevor Immelman.  After that event, he had knee surgery and was still somewhat hobbled in the Open.  Considering Torrey is his old stomping grounds, there was no way he’d miss this event.

Tiger was coming off the green towards the tee and we were arms-length away.  I quietly said “welcome back Tiger” and I actually got a “thanks man” reply.

After hanging out most of the day, it was back on the buses, to the car, to the plane, to head home.

Golf-wise it was a rather uneventful day with two little-known Americans atop the leaderboard – Justin Hicks and Kevin Streelman – both at -3.

After day 2, the tournament lead belonged to none other than Stuart Appleby at -3.  How awesome would it have been if he could pull off the win after I just got his autograph on my Open visor?

It was not to be.  After a +8 79 on Saturday, Appleby was finished and Tiger made his traditional charge to the top of the leaderboard – again with a -3.

Sunday at the Open was one of the best golf rounds that I can remember.  Tiger, Rocco Mediate and Lee Westwood battled it out down the stretch and ultimately into a playoff with Tiger and Rocco.  It took an incredible putt on 18 for Woods to advance to the playoff.

In the US Open, the playoff isn’t just a single hole or patterns of holes – it’s an entire round.  So they start out the two gladiators on Monday morning.

And Monday’s round was no different.  Back and forth until Rocco posted back to back bogeys on 9 and 10 to fall three behind Tiger.  But then Tiger went back to back and the lead was quickly cut to 1.  Rocco took the lead back after his 3rd straight birdie on 14 only to have Tiger tie him again on 18.

This forced a sudden death playoff for only the 3rd time since 1946.

Tiger ended it quick on the first hole of sudden death with a birdie to Rocco’s bogey.  You could see the pain in his gait and he struggled throughout the day – looking like Kirk Gibson in his walk-off World Series homer.

An epic battle, made even more epic when Tiger announced just two days later that he would undergo season-ending ACL surgery.  Little did we know then that this would be Tiger’s last major – at least until this writing.  Given his recent struggles, one might wonder if it was his last.

As usual, most photos and videos were snagged from the web and are the property of their respective owners.