I’ve been playing golf for over 35 years – some years, more than others.  Lately, I get to play a couple of times a year if I’m lucky.  When I started playing the game many years ago, it seemed like I had plenty of time available, but didn’t always have the money.  Then there was a switch in my prime earning years that I actually had money (not a lot), but time was now the issue.  Between a demanding job and family life, spending 5 to 6 hours on a course always seemed like I was cheating someone out of quality time.  These days, with two teens, including one in college, I now have neither time nor money.

Over the past couple of years, my playing time has significantly dropped off.  I guess I’ve become a bit of an “Event Golfer”.  Rarely will I just get out and play – it’s usually wrapped around an event.

For example, I still play in the Annual Bosco Golf Tourney – a tournament that is held as a fundraiser for my daughters’ former school.  In fact, this year, my group actually pulled off the victory just a couple of weeks ago!  This was the first time in 14 years of trying that I was part of the winning group.  Let’s just say I was easily the “D” player in that group on that day – but we did play as a team. 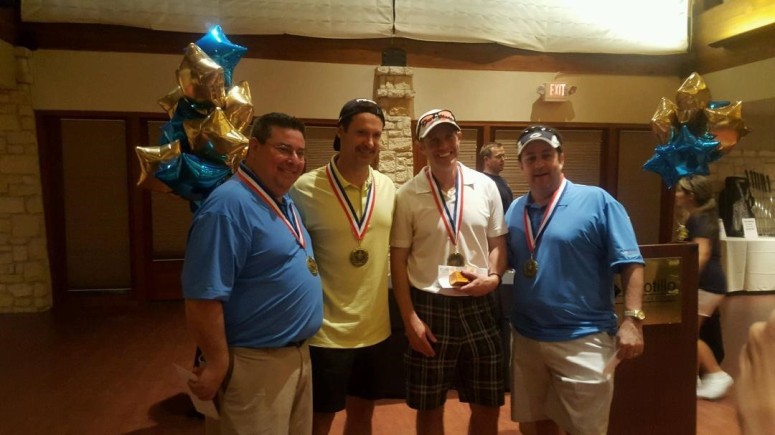 Another time that I’ll play is on a trip to Rocky Point with a small group of guys.  Having never been to Arizona’s Beach – and with a wife who has no desire to visit – the Guys Golf Trip to Puerto Penasco presented the perfect opportunity to check out what so many other Arizonans already know about Rocky Point – it’s a great place! My trip there two years ago wasn’t without drama, but it was an incredible location to play 36 in two days.

And last but not least, another recent event that I was invited to join is group of about 36 guys that heads up north to play at Torreon.  This multi-day event now serves as the highlight of my golf year.  You can read about that trip here.

To me, these annual events aren’t just about playing golf.  They’re about living life.  Now, with the limited amount of rounds played per year, I no longer feel guilty about breaking away for some guy time – as long as there’s more to it than just a round of golf.

Now, back to the headline.

Part of the spoils of winning the Bosco in February, was a round of golf for four back at the same course – Octotillo.  The group quickly agreed to a date to get back together – especially considering the temps in Arizona have started to hockey stick already – the sooner the better.  We settled on March 21.  Little did we know that the certificate we won was only good for after mid-April.

Since we already had the date, we decided to keep it and just play at another track – and save the certificate for another time.

We picked Club West Golf Club – a track that’s one of the three 18 hole layouts in the Ahwatukee Foothills.  For you “out-of-towners”, here’s a link to a virtual tour of the layout.

I started out #1 with solid tee shot to a perfect approach angle.  Then a wedge to about five feet.  Of course, I lipped out the putt and made par.  Normally, missing a close birdie putt would make me mad, but this start actually had me feeling pretty good considering how poorly I played in the outing a couple of weeks ago.

Then came #2 – a 135 yard par 3 with the pin middle left.  Mark hits his shot onto the green, but short right.  I’m next up and pull out my 9 iron. I take an easy practice swing and set it up for my normal baby fade.

I couldn’t have hit it more pure.  I barely felt the impact as I watched it stay on target.  Over my shoulder, Alex is chanting “it’s got a chance. it’s got a chance”.  It hits the green about 20 feet from the cup and tracks directly to the flag – and DISAPPEARS!  It’s in!  The celebration ensued!

I don’t know what happened next.  Alex had yet to hit, but I don’t even remember his shot.

As we approached the green, I grabbed this video. You can see their two shots on the right side.

From that point on, I was on Cloud 9.  As I looked down at my phone, I noticed we just got a text from Pete that he was on his way.  We quickly responded with the video and Pete was shocked at what he missed – only to join us on the 4th tee box!

What a day!  On top of that, I had perhaps one of the lowest rounds I’ve had in years on the golf course.  I shot a consistent 41-41 to close with an 82.  I guess I need to play less golf more often.

Funny thing is, the guilty feeling of taking a few hours away from work was still there. After the round, it was back to the office to catch up on what was missed.

One thought on “Hole in One!”