September is a great time to visit Happy Valley for a game.  The weather is usually perfect and that’s half the battle.  With the opponents usually non-conference cupcakes, tickets are plentiful and hotel rooms within a 60-mile radius can be booked.  And nothing beats tailgating on a warm end of summer day – with endless rows of cars parked on the green grass that will soon turn brown – or worse, white.

Over the past few years, however, even the cupcakes games have become challenging for Penn State.  Ever since the devastating sanctions that were placed on the team, no opponent can be considered an easy win. In the 4-years post-scandal, losses against non-cons such as Ohio, Virginia, UCF and Temple have piled up.

While most of these opponents are fairly new to the Lions, the Temple series dates back to 1931 and includes 45 games. So you can imagine the feeling in last year’s loss to the Owls. The loss was the first against the in-state opponent since 1941.  It snapped a win streak of 31 games – over 74 years for the Lions.

This year, we decided to make Temple our September game. It lined up nicely for our schedule to visit our daughter and it just happened to be the second annual Stripeout Game.

We picked up a couple of tickets on Seatgeek a few weeks ago and were pumped to be sitting along the 50-yard line again – just a couple of rows up from our seats for last year’s Rutgers Stripeout.

Then news came that Penn State would be honoring Joe Paterno at the game.  To us, this was perfect timing.  To many others, it was disgusting that the University would honor this man.

The Temple game marked the 50th anniversary of Paterno’s first game as head coach. But when you dig below the headlines and click-bait that the media portrayed, you understand that what Penn State was in fact honoring, was the Grand Experiment – Joe Paterno’s way of winning on the field with players who also won in the classroom.

The Grand Experiment was mocked and challenged throughout Joe’s career by his detractors. Every time a player got in trouble, Joe took heat for not having control over his team. I’d argue, that this happened in every program, but because Joe had higher hopes and standards, he was targeted and ridiculed.

But you can’t argue with the results. A student actually did his thesis on the Grand Experiment and proved that the Experiment was a success. His conclusion was that it was “as successful as any coaching mechanism in college football, and sports, history.” He continued that it went beyond coaching and into the development of the men off the field. Their success in the classroom rivaled the most well-known institutions in the country when it came to student-athletes – and at the same time, they were winning on the field. That’s what the Grand Experiment was all about.

They invited the 1966 Team back (along with over 500 Lettermen) as a way to recognize this new way of thinking that Paterno brought to football. To me, this is absolutely appropriate, but the media busted out their pitchforks and lit their torches – calling Penn State “tone deaf” for honoring a man who enabled a pedophile.  I’d be happy to share my thoughts with you on that topic – if you agree to listen with an open mind – otherwise, I suggest we agree to disagree.

Former Penn State great and vocal Paterno supporter, Franco Harris led an effort to lay some bricks where the Paterno statue once stood. Many supporters want the statue returned. I’m not in that group. Below are a couple of pictures – one during the celebration and one that we took on Sunday.

This trip was scheduled be to a quick one – land in Philly at 2:30 on Friday, drive the 3+ hours to State College, then leave Sunday at 1pm to catch a 6:00pm flight back out of Philly.  We’ve flown in and out of many places when heading back for game – including, Philly, Baltimore, our hometown of Scranton and even directly in to State College. We’ve had our share of issues with flights, but connecting into Scranton or State College has always caused problems.  With nonstop into Philly, what could go wrong?

Sure enough, we sat on the plane for 3-1/2 hours in Phoenix before we would be able to take off on our 4-1/2 hour flight. Brutal.  When you’re on the ground for as little hours as we had planned, those 3-1/2 hours are precious. Instead of spending dinner with our daughter, we were stranded in our home town in 20 inches of seat space. Thanks American. Your ineptness in weighing the plane took away a night with my daughter. You suck.

After getting into State College at 10pm, it was an early night with an even earlier wake-up call.  Kickoff was set for 12:00, so it leaves little time for tailgating. On top of that, it was also our daughter’s first day as a photographer intern for the football team, so she had to be at the stadium by 9:00am.

One thing we noticed was that a 12pm kickoff is early! Downtown State College was empty – not because everyone was tailgating, but because there was no one in town yet! There wasn’t even a line at the local-legend Waffle Shop. We ran around, picked up some essentials and headed to the stadium.

After leaving our daughter, we decided to take in the famed “Bus Arrival” – when, at 9:30am, the team buses empty out and the players walk through a gauntlet of people and into the stadium.  On this day, the honorary team captain was Josiah Viera – a 12-year old with a disease called Progeria. Click the link to check out ESPN’s E:60 on him, but have some tissues handy.

The bus arrival starts with the Lion! He pumps up the crowd as you hear sirens from the police escort as the buses make their way to the stadium. After the Lion comes out, the cheerleaders and some of the band follow.

Before long, the players make their way down Curtain Road towards the stadium. It’s hard to imagine how freshmen players feel on this walk, but it would be no surprise if their egos blew up just a little bit.

Most of those gathered include the parents and family of the players. I noticed an Aussie flag so I figured this would be the parents of Punter Daniel Pasquariello. What I didn’t know is that Daniel would be a part of an ESPN feature the next week on punters from Australia.

And towards the end comes Coach Franklin with today’s Honorary Coach, Josiah on his shoulders.

After the arrival, we made our way across the parking lot to join our group.  Another indicator of an early kickoff is the tailgating scene.  As we walked, it was clear that people were still stuck in traffic on the outskirts of State College.  At this point, it’s almost 2 hours to kickoff, but the lots are still somewhat empty, but traffic was intense.

Here you can see the early signs of fall as the trees start to change.  I can’t wait for our trip back in October for Ohio State.  I hope the colors will be in full bloom for the White Out – and I imagine the tailgate scene to be a little more lively with the 8:00pm kickoff!

It’s pretty apparent that in State College – at least on Football Saturdays, there are plenty of Paterno supporters. Call them (us) JoeBots or apologists, but you can’t take away how much positive impact this man had on the program, the University, the area and beyond. I usually tell people that I went to Penn State on the “Weekend Program” – attending Penn State home games nearly every week from the time I graduated high school until the time we left Pennsylvania 13 years later. And while I never paid a dime in tuition to Penn State (until recently), I say that I received quite an education from Joe Paterno. His quotes and lessons transcend football and are relevant to everyday life.

Believe deep down in your heart that you’re destined to do great things.
The will to win is important, but the will to prepare is vital.
Besides pride, loyalty, discipline, heart, and mind, confidence is the key to all the locks.
It’s the name on the front of the jersey that matters most, not the one on the back.
Success without honor is an unseasoned dish; it will satisfy your hunger, but it won’t taste good.

In case you didn’t realize, Penn State isn’t just a football school.  They have several other National Championships under their belt – including the reigning NCAA Champion Women’s Soccer Team and the Wrestling team. That said, without Penn State Football, how much of that is possible?  Like other major college football programs, it’s football that generates the vast majority of revenue for the rest of the school.  Penn State is in the Top 10 nationally for football program revenue – even after the NCAA tried to kill it.

At our tailgate, it was time for a quick taste of home thanks to Auntie Ann! Catalano’s hoagies, Middleswarth BBQ Chips and some other munchies – all washed down by some newly brewed Paterno Duquesne Light – the second in a series of Paterno Legacy Series beers. Before long, it was time to wrap up the tailgate and head into the game!

It didn’t take long for Penn State to score. And with it, comes something they call Popcorning.  The students, typically, get tossed in the air the number of times of the total score. Not far from us, you can see an Alum not wanting to outgrow the tradition. 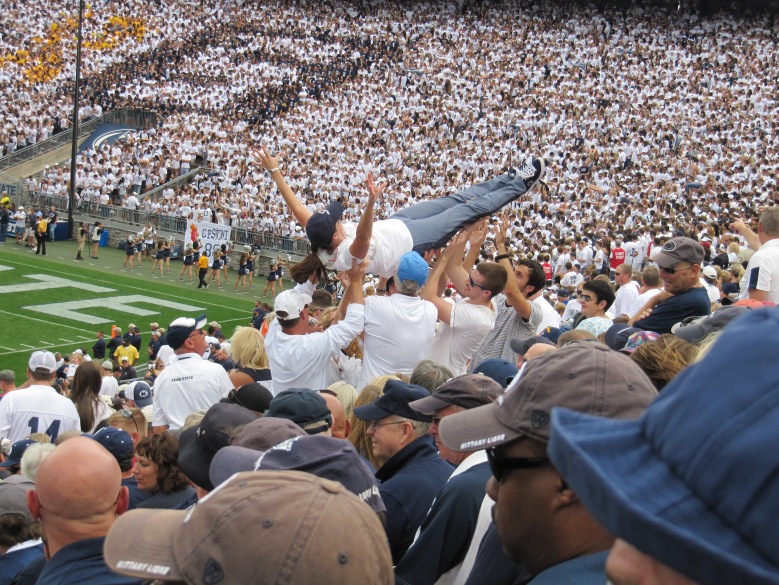 And below, you can see several students in the all-white student section getting tossed.

At halftime, the Blue Band entertained the crowd as we were in good spirits holding a 21-10 lead. 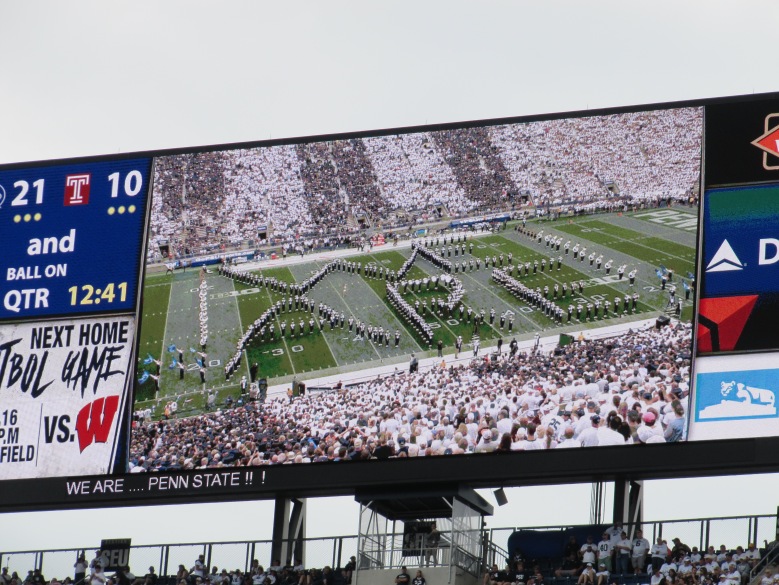 This year I noticed that the students created a False Start Count banner. I lost count, but it was up to at least 5 on the day for Temple.

The Linebacker U moniker couldn’t be more true. I wonder if there was ever a time when we had more LBs in the NFL.  Today’s superstars include Sean Lee, NaVorro Bowman, Tamba Hali, and Paul Posluszny. In addition to these Pro Bowlers, other Penn State Linebackers on NFL rosters today include Mike Hull, Nate Stupar, Michael Mauti and Gerald Hodges. Eight total linebackers on active rosters. Not bad!  That said, this year the LB corp is taking quite a hit with three of their starters injured. We’ll see how they bounce back to maintain the tradition. 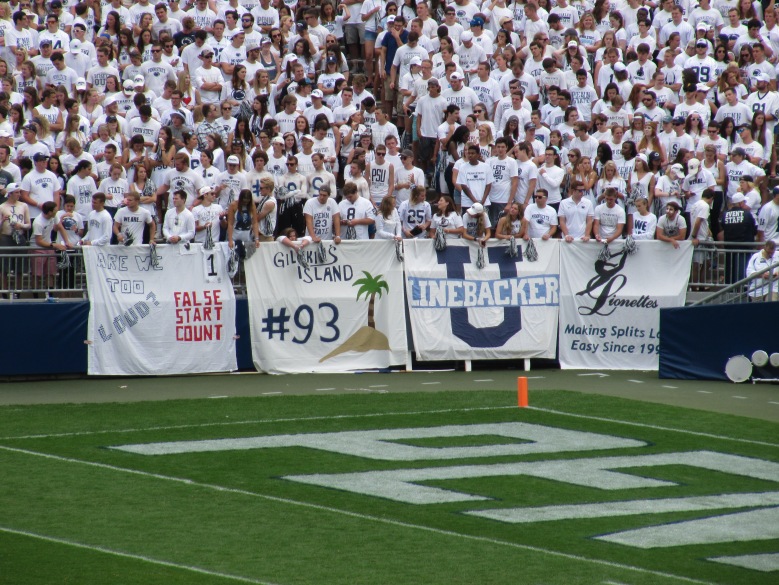 Speaking of traditions, the “Big Uglies” are back. After a few years away, the mascots (can we call them that?) are back to roaming the sidelines and entertaining fans. Here’s a cool story on these three brothers who have been doing this since the early 1990s!

Another tradition that never gets old is the singing of the Alma Mater, win or lose, in front of the student section. Of course, there’s a little more enthusiasm when they win.

As the players head out through the tunnel and into the locker room, they take turns ringing the Victory Bell. Below is one of the photos my daughter caught that was posted on the football team’s Instagram page.

Here’s a link to an awesome video clip of the team celebration in the locker with their new Honorary Coach, Josiah!

And of course, no trip to Happy Valley would be complete without a trip to the famed Berkey Creamery – where they tout from cow to cone in 4 days! Today’s treat? Peachy Paterno, of course!

That wraps up another great trip back to Happy Valley. Sure, I’m biased, but I can’t think of a better place to be on any Saturday, not just a football Saturday. See you in October!