After last year’s phenomenally entertaining season, expectations for the 2017 season of Penn State Football are through the roof.  While a victory in the Rose Bowl would have capped off an already storybook season, I feel as though the loss strengthened the team’s resolve to improve and come back even more committed to excellence.

The Lions started the 2017 campaign 2-0, defeating MAC opponent Akron and their in-state rival Pitt, fairly convincingly.  This week, they welcomed Georgia State to campus – not your best out-of-conference matchup, but remember, the upstart Panthers were leading the eventual B1G Western Division Champion Badgers 17-13 with under 8-minutes to play last year.

Sure, when you travel 2,000+ miles across the country, you want to see a great game, but the reality is, any game in Beaver Stadium is a great game. Throw in some late summer weather and you’ve got yourself a memory in the making.  Oh, and it doesn’t hurt when you’re visiting your daughter at the same time.

On this trip, we decided to take a stop in Pittsburgh before heading to State College the next day.  I’ve traveled through the Steel City frequently, even stayed overnight a couple of times, but never really spent any time touring around. How can you not like it when you’re welcomed by Penn State and Steeler legend, Franco Harris as he recreates the “Immaculate Reception“? 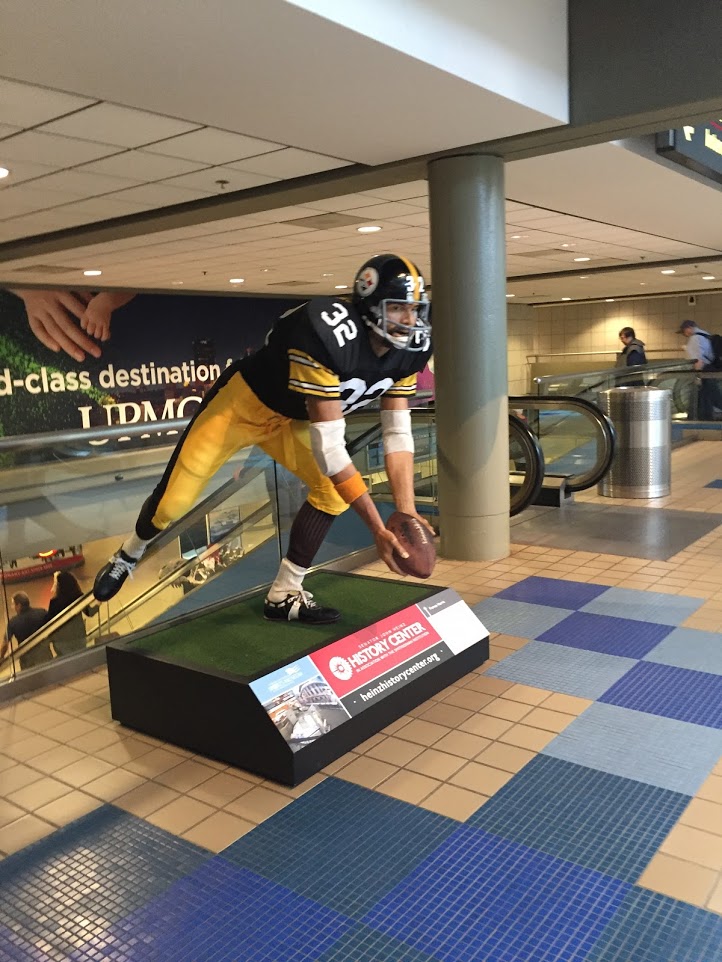 We made our way over to the Duquesne Incline – a funicular offering spectacular views of the Three Rivers area. Originally built in 1877 to haul supplies up the 600′ Mount Washington, the Incline nearly closed for good in 1962. The residents saved it with a capital campaign and I’m glad they did.  The Duquesne or its sister, the Monongahela Incline are worth a visit. The museum at the top of the Duquesne was also worth some time. Old photos documented the historic flood of 1936 and The Great Fire of 1845. Be honest, when was the last time you said “funicular”?

Riding up, we chatted with a young couple. She was visiting from Florida since her home was damaged in the hurricane.  While away, she decided to tour around.  They spent the earlier part of the week in Philadelphia, then made their way to Pittsburgh. Yet another example of turning lemons to lemonade!

We took in sunset at one of the local bars at the top of Mount Washington, aka Coal Hill and could not believe the views of the Golden Triangle and surrounding areas.  Downtown Pittsburgh, or Dahntahn as pronounced locally, sits at the confluence of the Allegheny River (on the left) and the Monongahela River (on the right) and they create the Ohio River – hence the names Golden Triangle and Three Rivers.

On the west side of the Allegheny, you can see the baseball stadium, PNC Park and the football stadium Heinz Field. We learned that ferries run from the south side of the Mon River over to Heinz Field on gameday.  Tonight, there was very little boat traffic, but with Pitt hosting Oklahoma State tomorrow, things were about to get busy. 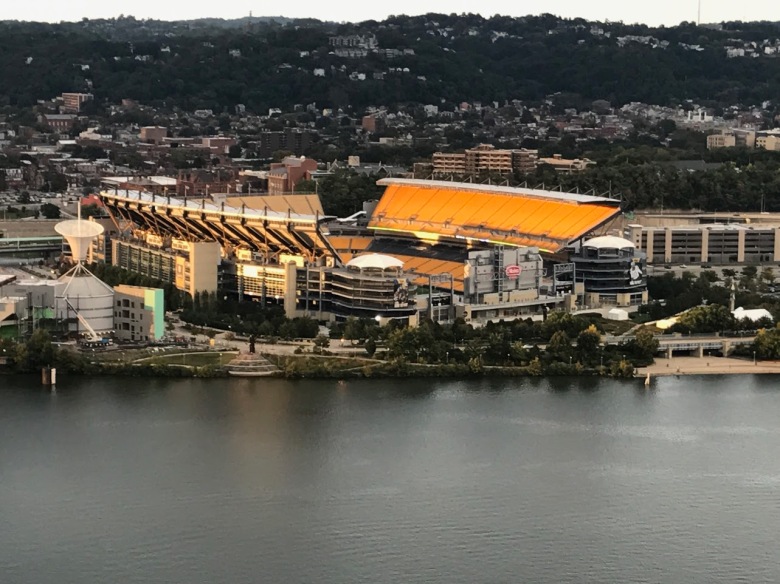 The next morning, we met up with a friend and went to breakfast at Pamela’s Diner in the famed Strip District. Pamela’s is known for their breakfast potatoes – and it’s easy to see why.  This was a great breakfast joint worth visiting. There a quite a few locations around town, so you have some options.

The Strip District is Pittsburgh’s former manufacturing and millworks area.  Its location along the Allegheny River provided easy access to supplies. It’s been transformed over the years to become a marketplace of various specialty shops, restaurants and bars, showcasing the city’s ethnic diversity, with plenty of Italian influence. You can tell from the pastry shops, to fresh tomatoes, to cafes with men playing cards in the street that many Italians made Pittsburgh home.

Pittsburgh is also home to at least three major universities – the namesake, University of Pittsburgh, the renowned Carnegie Mellon University and Duquesne University. It’s no wonder that the town is making a comeback – with technology and medical leading the way. 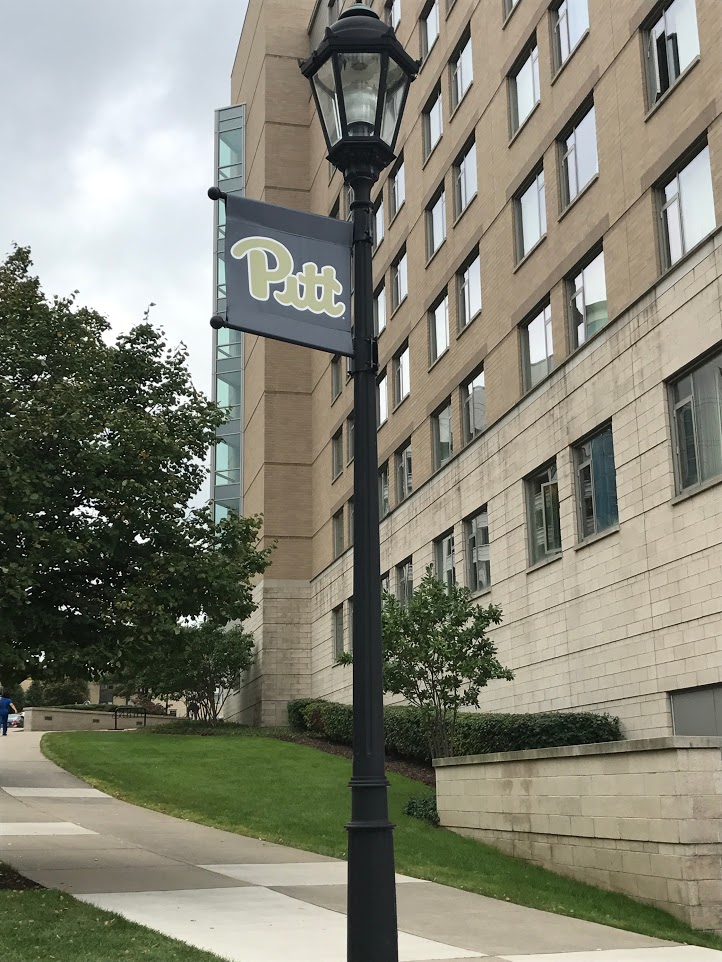 Enough of Pittsburgh! It was time to head to State College!

We visited Nittanyville Friday night. This is the area where students set up tents early in the week in an effort to secure the best seats in the house for gameday. Last year, we stopped by during Ohio State week and the place was packed in spite of some nasty weather. Even with mild conditions, there were decidedly fewer campers for this contest, so much so, we even had a hard time getting rid of all of our candy we brought for the crowd.

Whenever you travel across the country for a game, tailgating is always problematic. Unfortunately, we’ve gotten accustomed to hoagies, a bag of Middleswarth chips and six-pack. Clearly, not my ideal pregame setup. Thankfully, this time, we got lucky.

Our daughter’s friend, Kelsey, is the third of three kids to attend Penn State, and her parents, John and Debbie, have become pretty adept at the fine art of tailgating. We scored the invite to join them at their ITK Tailgate. I quickly learned that ITK is Greek for “I Tappa Keg” – a non-sanctioned co-ed fraternity of tailgaters.

They’ve mastered the setup and repeat it for every game, rain or shine, traveling in from New Jersey and setting up shop as early as 8am, even though kickoff wasn’t until 7:30pm! The menu was larger than some restaurants – and they served breakfast, with mimosas of course, lunch and early dinner. Eggs sandwiches with Pork Roll (a Jersey delicacy), wings, meatballs, pulled pork, hotdogs and more were served throughout the day. Throw in some cookies and desserts and it’s amazing that people aren’t in a food coma before gametime.

Oh, and they had a bar. Not just some coolers with lawn chairs. Nope. This was a full-on 3-sided bar with high-top seating for about a dozen. The bar menu was as diverse as the food menu. Sure there was the prerequisite Bud Light in either Eagles or Giants cans. I did notice that the Eagles cans were clearly the favorite, sorry John. There were plenty of “handles” of liquor as well. And while that would be plenty for any basic tailgate, they went above and beyond. They had a concoction aptly called Blue Stuff, another creation called Mango Surprise and finally some Iced Tea Vodka premix. 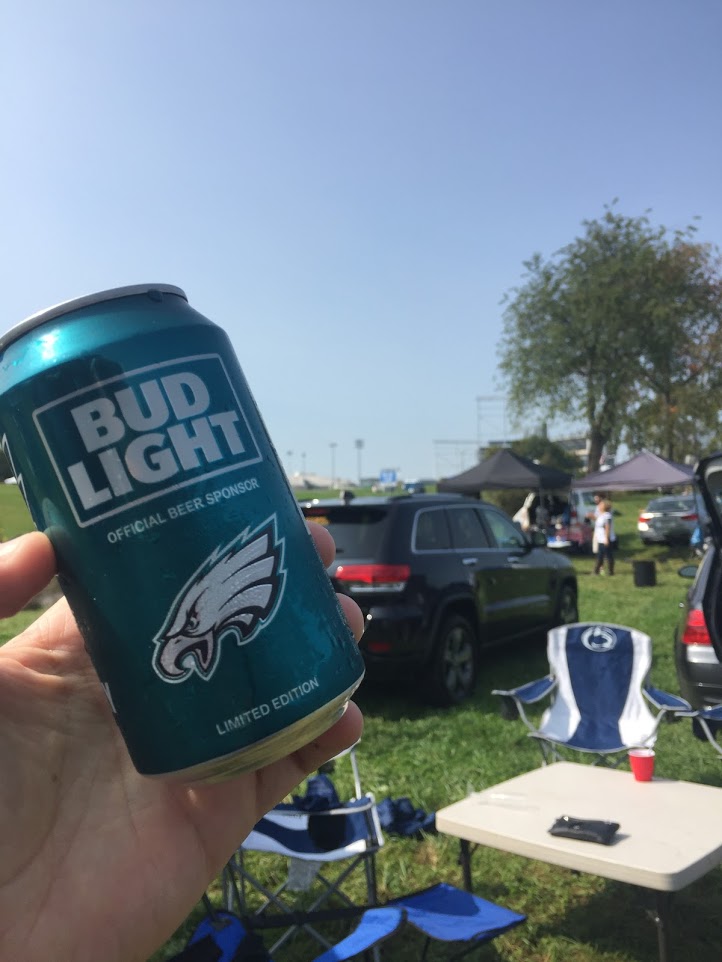 And what self-respecting fraternity would host a party without Jello Shots? It wasn’t just one flavor, it was at least two that I tried – Blue Raspberry and Watermelon. Gotta have blue drinks at a Penn State game, right?

Of course, if you’re hanging around for almost 12 hours of tailgating, you need to have entertainment. Beer Pong, KanJam, Ladder Toss and Bags were all available while you listened to a pretty solid mix of tunes, including some stadium favorites.

Last but not least, there was this contraption. I didn’t know if I should include it under the bar or the entertainment. 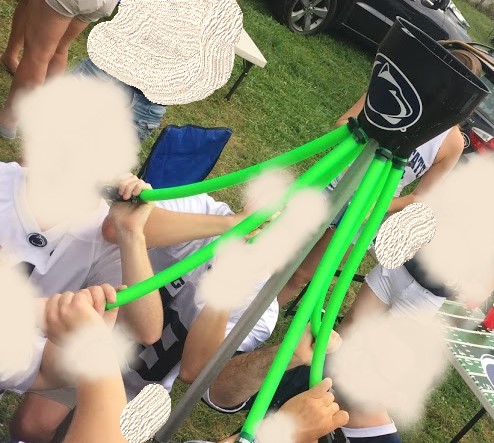 It was tough to count the number of people. Between the bar, the dining area, the lawn chairs and the games, dozens of people mingled. Simply amazing. A great setup all around.

After spending some time at the tailgate, we made our way up towards the stadium to take in some other Penn State gameday traditions.  Along the way, I overheard some guys referencing Buffalo, so I had to check their #BillsMafia credentials. Sure enough, one of them was from Tonawanda – and turned out to be a member of the Penn State Hockey Team. 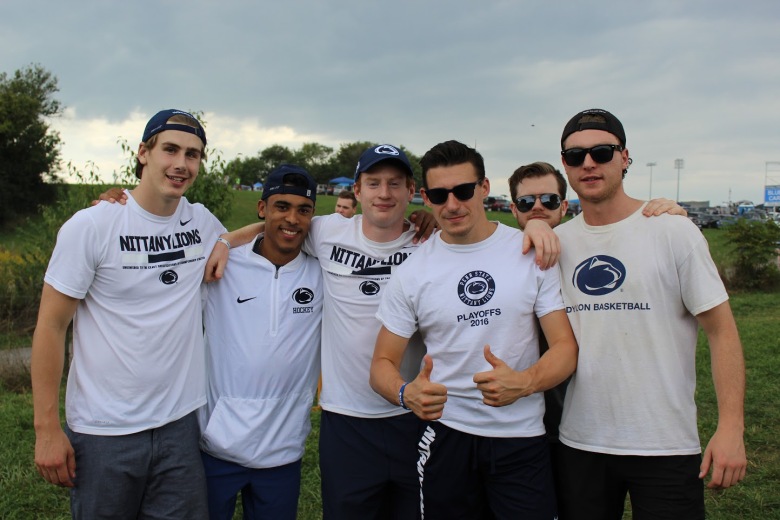 In case you don’t know, the Penn State Hockey Team had a pretty special season themselves last year – winning the B1G Championship in an 2OT thriller. Freshman Liam Folkes, second from left, scored the “Golden Goal” in double-OT. Folkes wears #26, just like another pretty special player in Happy Valley.

Bus Arrival is one of the traditions that fans need to experience at least once. Sure, it takes away from precious tailgating time, but the atmosphere is simply electric as the old Blue Buses pull up to the crowd, the players exit and they make their way through the gauntlet of screaming fans. 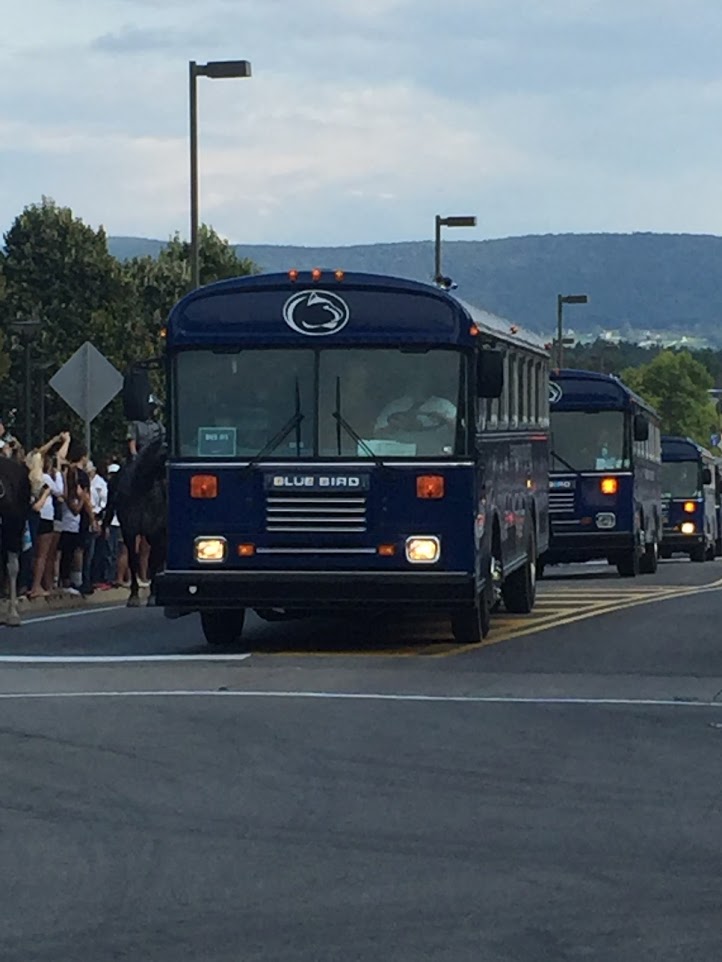 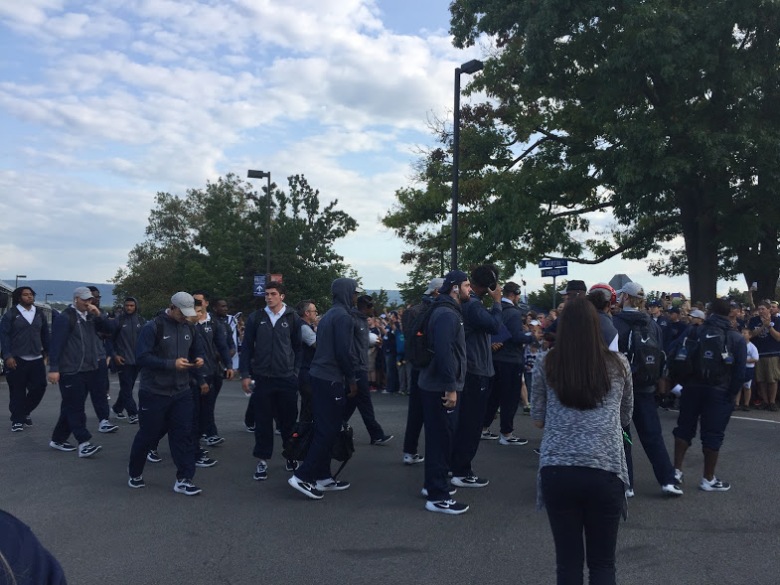 The game itself served as a tune up for Penn State Football as they prepare to open their Big Ten Season next week against Iowa.

The Lions destroyed Georgia State 56-0, preserving the shutout by icing the kicker on the final play of the game. Franklin took a lot of heat for calling the timeout, but gave a different reason for the move – saying he coaches till the end and the guys didn’t know how to line up properly. Either way, I’m OK with the decision.

The next day, it was back to Pittsburgh for a late afternoon flight. With some time to spare, we found the Penn Brewery for lunch. We had to sample some pierogies and potato pancakes before leaving the city – and it didn’t disappoint.

We had enough time to make the drive up Mount Washington and catch the views of the city during the Steelers vs Vikings game. You could even hear the roar of the crowd during the game! And you can see the difference in boat traffic! 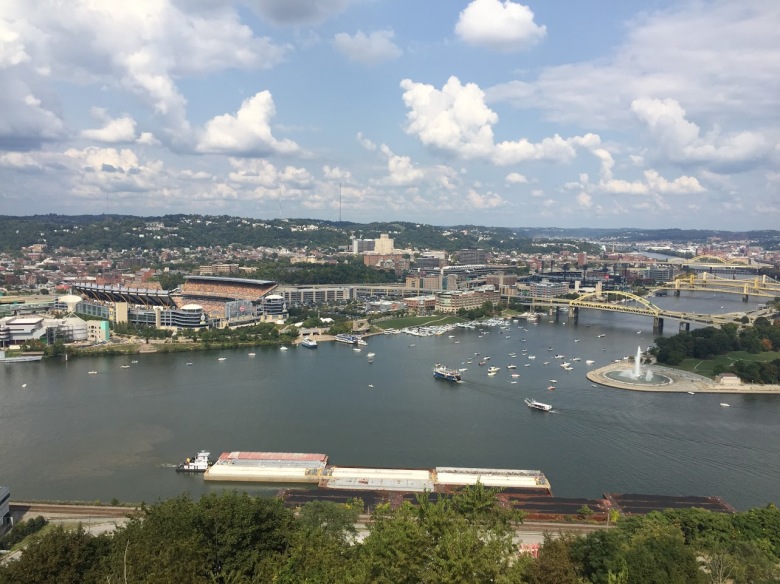 Before long, we were on the plane back to reality.  Next up, a trip back in October – when the competition heats up with the Michigan Wolverines coming to town.

This short stopover in Pittsburgh was an awesome little side trip experience. If you get the chance, take a day or two and visit this once soot-covered town. Just like a Pittsburgh Style steak, the good stuff lies beneath the charred surface.