After spending the day in State College on Saturday, we visited with family in Scranton before heading out to the second part of our last minute trip.  Sunday morning we were out the door at 7:30am to head to MetLife Stadium in East Rutherford NJ. The short 2-hour drive through the Pocono Mountains and Northern NJ would be better later in the fall, but the weather was perfect and the ride was easy.

We were flying out of PHL later that evening so we wanted to make sure we parked in an area that allowed for a quick exit after the game.  Based on some online research, we found a place called Redds, which is only about 1/2 mile from the stadium, but it’s not walkable due to the roadways and traffic.  The online reviews made it seem like it was an easy-in/easy-out place that offered a quick shuttle service.  Add to the fact that it was $10 cheaper than stadium parking and we took a chance.

Redds didn’t disappoint. We arrived early enough to get a decent spot towards the front the lot. After lathering up with sunscreen, we walked to the shuttle area and were immediately aboard a small shuttle. They don’t waste any time boarding large buses, so you’re on board and moving in minutes.

A couple of minutes later, you’re dropped off just outside the gates of MetLife. With the crystal blue skies overhead, we were a little worried about sitting in the sun all day, so we wanted to see if we could get tickets under cover. We didn’t see any scalpers walking around, so I’m not sure where they are allowed to set up shop.  We took the search to Ticketmaster and monitored ticket locations and prices as we toured around the outside of the air conditioner-looking building. 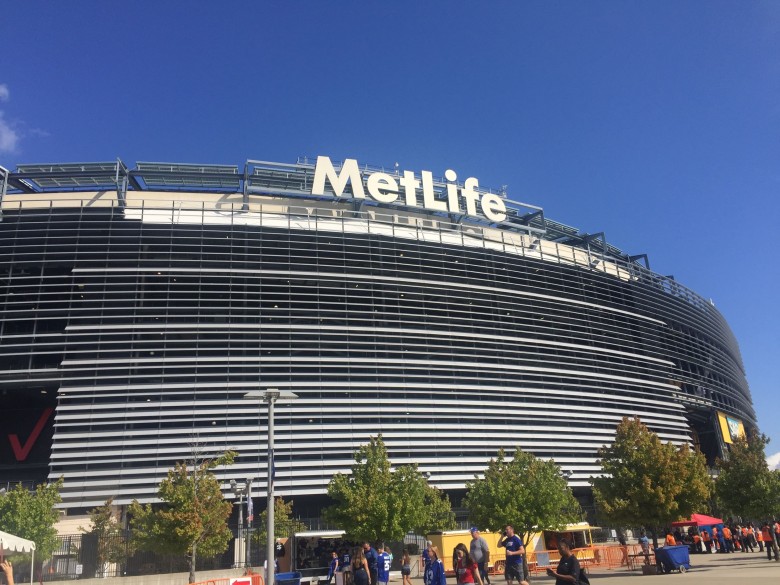 The Bills Mafia and Red Pinto Tailgate crew were hosting another tailgate this week – in the same location they were set up just a week earlier when the Bills visited the Jets at MetLife. We tried to find them, but the location was too far away and we were still focused on securing tickets.

The one thing we noticed at this game was that the team colors made it very difficult to get a feel for how many Bills fans were around. Up close, it was pretty obvious that Bills Mafia was well represented.

We secured our tickets in what we thought would be under cover and entered the stadium with plenty of time to walk around inside. We had been here before, but it was back in 2012 for the Penn State vs Syracuse game in what was being billed as the Battle in the Apple. Prior to that, I had been in the old Giants stadium for a couple of Penn State games.  Once for the original Kickoff Classic in 1983 against Nebraska, when the Huskers destroyed the Lions 44-6 and again in the 1992 when the Lions took care of Rutgers, 38-24.

I’m still struggling with calling the Jets and Giants New York teams. Sure, you can see the city from East Rutherford, but just time how long it takes to get into the city from here during rush hour. The Bills are truly the only New York football team! 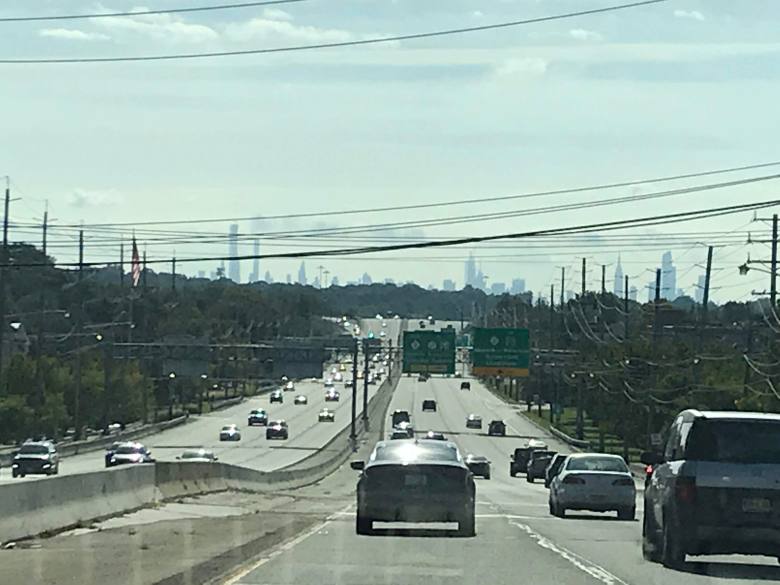 Inside, we toured around and took a peak at the external views from the 200-level where our seats were. MetLife, home of the Giants and Jets, sits in what is known as the Meadowlands Sport Complex. In addition to the football stadium, the complex is also home to the Meadowlands Racetrack and the Giants’ training facility.

The Meadowlands Racetrack is home of the Hambletonian, essentially the Kentucky Derby of Harness Racing. Whenever I see a harness track, I always think back to my dad and the days I spent with him at places like Pocono Downs and Monticello. Great memories. 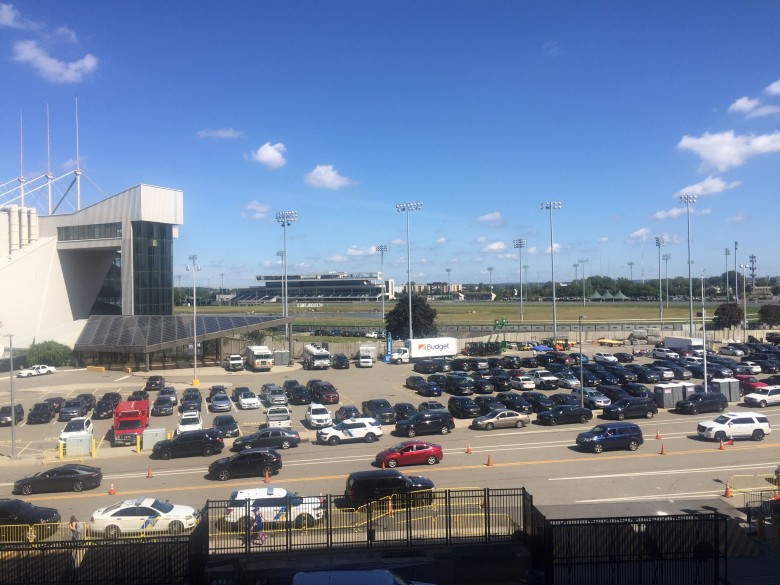 The parking area around the stadium was still pretty full of tailgaters when we entered the stadium. I’ve always said, tailgating on concrete or blacktop is just not natural when compared to the open fields of grass at Penn State. Thankfully, State Farm Stadium, home of the AZ Cardinals learned that lesson and put in a huge swath of grass dedicated to tailgating. I’m not aware of other stadiums that offer that awesome amenity. 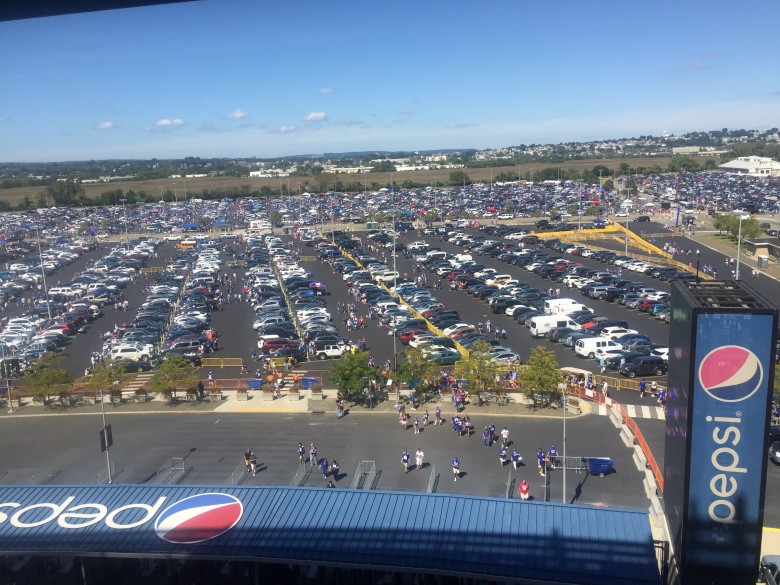 As we got to our seats, we were thrilled to find that they were under cover and would likely remain that way for the entire game.  The sun was literally baking the fans in the east stands all day.

The photo below was taken 20 minutes before kickoff. Hard to believe how many people were not yet seated. Granted, I’m never this early for a game, but now I know I’m not alone.

The players entered the stadium just 5 minutes before kickoff and there are still tons of empty seats.

And then another shot just 1 minute before the 1pm start.

And finally, the first possession. 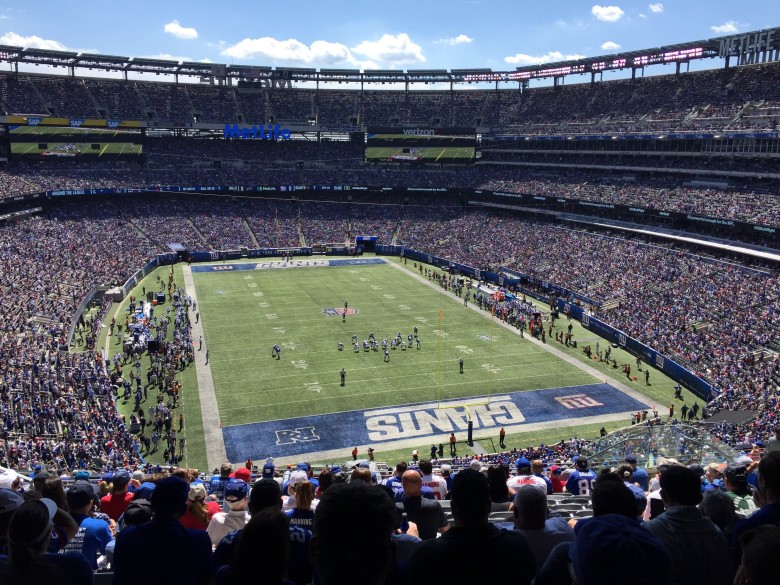 I wore my Penn State hat and throwback Andre Reed Bills Jersey.  I decided to root for Saquon to play well and the Bills to win.

It didn’t take long for 2nd year phenom to make an impact. He was featured on the first drive, one that only needed five running plays and ended with a Barkley 27-yard TD run. The fans went crazy considering they blasted the coaching staff the week earlier for the lack of touches by Saquon. Those fans sure know how to coach.

After that, it was all downhill for the Giants and their passionate, yet vulgar fans. Never have I heard so many F-bombs dropped at a football game. And they came from all directions, in the thick-as-molasses New York accent.  I joked that I never knew that Josh Allen and Cole Beasley had the same middle name.  All I heard were fans yelling, “it’s Josh F’n Allen for God’s sake” or, “tackle him, it’s Cole F’n Beasley you idiots”.

By halftime, the Bills were up 21-7 and many of the sun-drenched fans in the east stands had already had enough. Either the sun or the Giants performance took its toll and many left at the half and didn’t return.

Though the Giant’s scored early in the 4th, the Bills bounced right back and countered with a clock-eating TD of their own to put them back up 28-14 with less than 6:00 to play in the game.  At that point, most of the stadium had made their way to the exits – including us. On the way out, we couldn’t believe the number of Saquon jerseys we saw. For a second year player, he certainly has made an impact on sales.

With the thousands of people now leaving, the concern now was getting back to Redds and on the Turnpike before the entire stadium cleared out.

Sure enough, Redds didn’t let us down. By the time we got to the designated pickup spot, a shuttle was pulling in and ready to load up for another return trip. Minutes later, we were back at the car on our way to Philly.

After some heavy traffic on the NJ Turnpike, we were back in Philly, returning the car and boarding up for the five-hour flight home. What a great weekend of football, friends and family! To top it off, we went 2-0 for the trip and had some great late summer weather. And to think it all came together within 24 hour of departure.

The next week, the Giants decided to start their 1st round pick, Daniel Jones over Eli Manning. Jones’ first performance was everything the Giants could have hoped for in drafting the relatively unknown from Duke. With his performance, you have to wonder if we’ll ever see Eli start again – for the Giants or elsewhere.